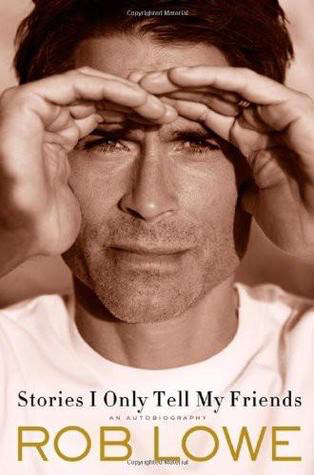 Stories I Only Tell My Friends is an apt title and written by just an apt personality. I have seen many of Rob Lowe’s movies and TV appearances and generally like him. He also comes with a reputation of substance abuse and contract disputes due to pay issues. Perhaps this was the book to provide insight into those areas and clear up what person Rob Lowe really is?

Lowe’s book was an enjoyable read given the plethora of stories he tells from his childhood to his adult life as a entertainment actor. Lowe details his steps to becoming an actor on the stage, to making it as a young movie star and finally making it his goal to try maintain this position. He traverses you through the process of casting against similar actors trying to make it such as Tom Cruise and Sarah Jessica Parker. Lowe also discusses the aspects of drugs and alcohol in his life in an effort to provide transparency versus what has been published over the years in the tabloids.

Although I generally liked Lowe in his many films I’m a big fan of his role in the West Wing. Lowe spent a few chapters describing his time at the West Wing. One of the most mind-blowing stories he told was how he ended up on Flight 93 in First Class that happened to be the practice flight for the 9/11 terrorist attack. Only after being questioned by the intelligence community did he realise his life could have dramatically changed. A what-if scenario if that practice flight was the real flight which happened only a couple of weeks later.

For me there were many parallels from the entertainment industry to my working life and ethic. Working in the right location, being good to people at all levels, constantly learning and challenging yourself are all facets that Lowe points out as key areas of focus. I appreciated Lowe’s openness and honesty into his family life and the career he has pursued since a young teenager.