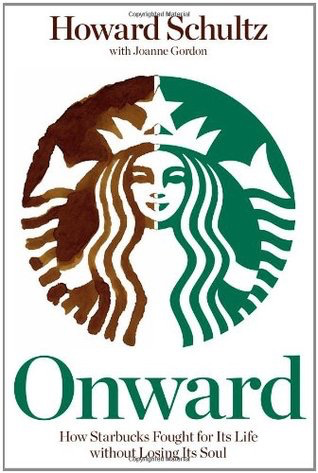 I was quite surprised when I realised I haven’t read Onward and that it has taken me this long to pick it up! Perhaps it was due to not being a coffee drinker until a few years ago? I lived outside of Seattle for a year back in 2009 / 2010 and know Starbucks, Pike Place and the global following Starbucks has. What I didn’t know was the history, the issues and failures, lessons learned and obviously that it has survived to become the Starbucks we know today. I picked up the book to learn about these aspects.

Onward begins with Howard’s second run at the CEO position. Starbucks had lost its way, its essence and his only choice was to come back and reestablish what was core and key for the organisation in order to regain its mojo. Schultz chronicles many of these aspects; whether it was the aroma of the store, quality of coffee, interaction with their partners (i.e. employees) and customers, or growing the business through innovation. Each story is quite detailed and provides an insight on how successful entrepreneurs (and / or CEOs) execute on ideas and bring their respective teams to make things happen. Howard Schultz is clearly switched on however it was clear he had a very strong supporting cast.

What I liked about this book was learning about thinking in a slower fashion and not necessarily getting swept away with an idea. Like coffee, brew it, let it sit and mix before taking your first sip; otherwise you miss out on so much of the experience. There were many of these lessons throughout the book. The only issue was that it took me a little while to get into the book. Once in though I was attentive on the stories, issues and learnings that Schultz laid out.

There are a lot of people that do not like Starbucks in my social circle; note I’m Australian and my country is full of coffee snobs. Whether you like Starbucks or not it is a fascinating case study on an organisation that had an idea, executed, lost its focus, pivoted and has continued to be successful.