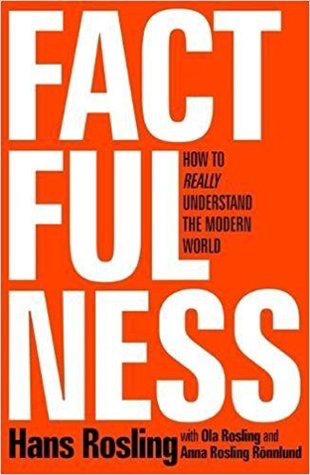 Factfulness comes highly recommended as a sound book to challenge status quo, squash limiting beliefs and to challenge society to increase critical thinking. I purchased Factfulness given Bill Gates’ recommendation on his blog and the fact that he has gifted this book to every college graduate in 2018 says a lot.

Hans Rosling along with support from his family divide this book in chapters based on instincts that we have developed as humans. Whether fear, size, negatively, urgency and/or blame he lays out how we could better approach the use of data and facts and dispel our typical instincts. Each chapter also includes a neat conclusion summarising the points made and key takeaways for the reader when taking facts and figures into account. It helped with my highlighting as it meant I could just read through each chapter and then make sure I understood the summary.

Rosling ends with his five areas of concern for the future world. He sees risks of global pandemic, financial collapse, world war, climate change and extreme poverty. They are all quite likely to happen (with the first three all having already happened). Furthermore each has the potential to cause mass suffering either directly or indirectly by pausing human progress for many years or decades. My biggest takeaway is that we should be more focused on these areas versus on surface level biases and news candy not based on facts. Speaking of takeaways I have a plethora of them from this book given the focus on facts:

Key takeaways from the book: