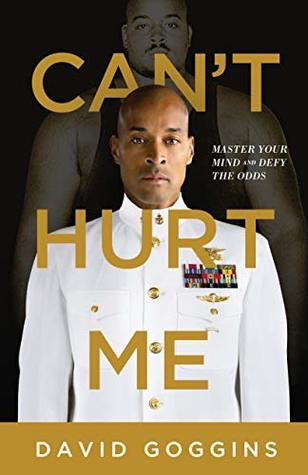 I listened to this audiobook based off a recommendation from a friend. As soon as I looked at cover I knew that David Goggins would have something to say. I have great respect for anyone who has gone through the Navy Seals BUDs training. What I didn’t know was that Goggins went through it three times, and subsequently Army Rangers training and Delta Force training. He also has held the Guiness World Record for the number of pull-ups in a 24 hour period (URL). You might say that this guy is all about the brawn and you’d be wrong. The big lesson from reading this is to work on the mind. As the title says, can’t hurt me! In in Goggin’s words, develop mental calluses.

What I liked about the book was the parallel approach of the narrator telling the story and then having a discussion with Goggins every so often. In those breaks the narrator and David would discuss aspects of the book and provide more perspective. I felt like I was able to get a better understanding as to why he did what he did and why it was included in the book (The “Why”, thank you Simon Sinek).

My only criticism is that David talked about pushing your boundaries, doing more and being better. Whilst this is important, your body must have balance. I think it is incredible what he has achieved however as he alludes at the end of the book, he had some massive physical adversities to sort out. Now he stretches and puts wellness back into his body. Perhaps that is the best lessons or us all. Always challenge yourself mentally and physically however keep the balance and put back in what you take out.