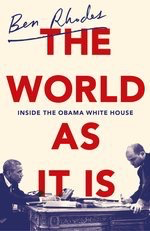 Late last year I watched a Netflix documentary about Obama’s last year in the White House. Ben Rhodes played a major part in this documentary as he is the person responsible for developing the foreign policy messaging in the White House. Said differently, everything you heard Obama say publicly on foreign policy had Ben’s fingerprints all over it.

Recently I saw this book released and I was intrigued to read more about Rhodes’ story. Like many in the Obama White House, he begun his journey during Obama’s Senate days and stayed on the wave as it continued to build momentum. I’m a passionate traveler and keep up to date with all the current events in the world; whether via a newspaper, Twitter or a podcast. We all develop opinions about these events based on what we have read, heard or discussed with others. Sometimes we do not have all the facts and other times we skew our opinion based off our values and map of the world. What I liked about this book was the behind the scenes details on how the message was developed, why it was developed that way and the ultimate receiving of that message by the public. The best example would be the killing of Osama bin Laden.

Whilst I didn’t really learn anything significant while reading The World As It Was, I thought it was an enjoyable read. I’d recommend it to others in order to learn more about foreign policy development.