My Rating of “Facts and Fears: Hard Truths from a Life in Intelligence” by James R. Clapper: 8 / 10 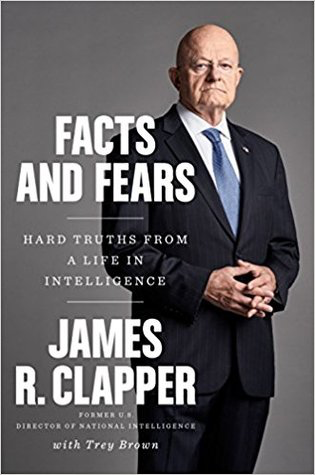 One could consider the books I have read of late as “political binging”. Most of the books have been focused on historical events and others on current events. The choice to read Facts and Fears was to get a better understanding of a key aspect of the political world; intelligence gathering. One that is based on facts versus opinion.

From the onset Clapper outlines the theme of this book: intelligence is about fact gathering and policy is left to the politicians. With this foundation set he then chronicles his life. Clapper begins the story as a young boy travelling around the world given his father’s role in the government and finishes with his own journey in the intelligence world.

Clapper has had a long and very interesting career in the military and subsequently in national intelligence. Clapper covers many points that have fundamentally changed the way the US gathers intelligence. Furthermore it has impacted how the US works with foreign governments. One example he cited was the launch of Sputnik and how it dramatically altered intelligence gathering. Prior to the launch all governments did not really know who owned space and how each other would behave if that fact changed. We all know the result of that change now!

My favourite part of the book was Clapper’s detailed explanation of key events in intelligence history. For example, he provided a intricate review of the NSA Edward Snowden leak. Whilst I won’t go into detail here I was surprised with some of the facts I didn’t know. I also found Clapper’s assessment on the impact to both the USA and intelligence gathering very enlightening (both during and post the incident). I also look at Edward Snowden in a different light because of this.

This isn’t necessarily the political opinionated writing you would normally come across in this genre. I have come away with a better understanding of how national intelligence and the military work interact with governments.