My Rating of “Talking to Strangers” by Malcolm Gladwell: 8 / 10 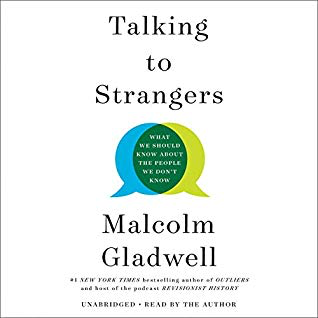 Talking to Strangers was quite a surprise of a book. I’ve read a few Malcolm Gladwell’s books many years ago. It has been a while since picking one of his books up. The title is quite obvious on what Gladwell’s approach on this book would be. And as usual I came away with meany learning about the intentions of strangers when I engage them. Something we can all can learn from!

Like most Gladwell books, Talking to Strangers anchors on a theme which is illustrated by a number of case studies. One of the themes is that our default assumption when talking to strangers is that they are telling the truth. Our make-up is to believe what we hear from unknown people during exchanges. I had to step back to think about this, however, he is essentially right.

Gladwell also touched on other topics such as coupling in relation to suicide and how we lay blame on strangers if things go awry. As always, he lays out some fascinating arguments backed up with facts, 3rd party research and interviews.

Talking to Strangers is certainly worth picking up to understand how we behave and interact with strangers. That in itself will be a long term benefit.