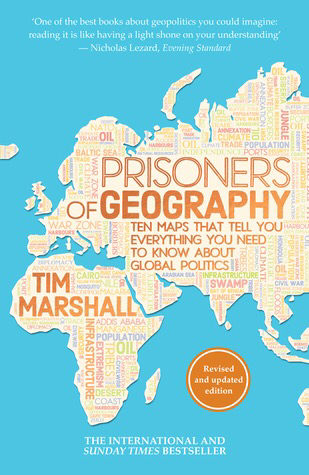 Prisoners of Geography would have to be one of the more interesting books about the world and how geo-politics has played a role in shaping it. Did you always wonder why India never fought China, why there is so much conflict in the Middle East and perhaps understanding Putin’s annexing strategies? This is all detailed in the book plus more! I know a lot about geography however I feel ignorant in my knowledge of geopolitics. Hence why I picked up this book to really understand how the world has been shaped and what we have to look forward to in the future!

Describing this book is difficult. It is certainly jam packed full of facts as you traverse through Russia, USA, Western Europe, Africa, Middle East, India and Pakistan, Japan and Korea, Latin America and finally the Artic; all separate chapters in the book. It is clear Marshall has done his homework as you learn about Putin’s strategy to expand Russia back into areas of the former Soviet Republic, the toxic relationships between Middle-Eastern countries based on European border line drawing and why Africa just cannot get itself together.

The book did take me a fair while to get through as I wanted to absorb and retain a lot of the information presented. It really did help me understand what the world looks like today and how it potentially could change tomorrow. An easy example would be that you will most likely never see India or China go to war given the Himalayas (it has never happened because of this mountain range). It is definitely well written and I believe any global citizen should read through it to learn more about the world we live in!

Three key takeaways from the book (its more than three given all the learnings from this book):