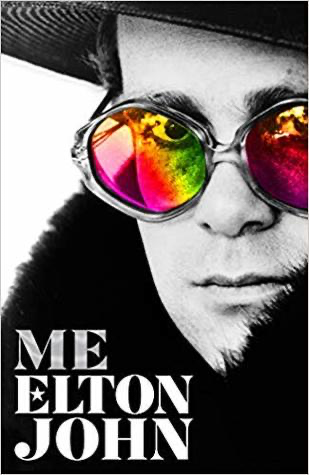 If you had to pick an artist who has survived the decades of change, has been controversial or is incredibly and consistently creative in their art? I would certainly pick list Elton John in the top ten. There are many artists of his era that have suffered from depression, disease, drugs and death. He has been able to dodge them all and instead has reached accolades of becoming a Knight of the British Empire, a Grammy and Academy Award winner, a Dad. Plus Elton John is still a respected musician who continues to blaze trails.

Elton John isn’t all that we see and hear through mass media. Me provides a honest and open view into his life. He reflects on his upbringing, his coming out as a homosexual after being a late bloomer in the sexual arena. He also delves into his excessive obsession with drugs and the various relationships in the entertainment industry; oh and of course his reputable temper. It is extraordinarily honest review of his life!

As usual with biographies, I found the beginning a little slow however the my interest picked up with every new chapter. I wished Elton John read all of the book (he narrated the introduction and conclusion). However, I thoroughly enjoyed the narrators approach. Whether you like Elton John or not, it is an entertaining book with plenty of interesting stories of people we all know of in the industry.

Note: I don’t have any key takeaways in this book review. It is those random of books that I get the opportunity to just turn on, read, enjoy and be entertained. There are learnings for sure however nothing that I would necessarily capture or call out that I haven’t already done in other books.