My Rating of “Last Days of the Concorde: The Crash of Flight 4590 and the End of Supersonic Passenger Travel” by Samme Chittum: 9 / 10 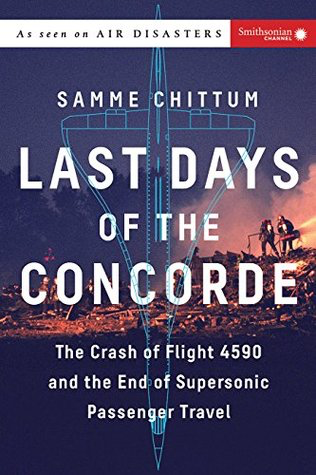 It has been nearly 20 years since Flight 4590 had its fatal accident after taking off from Charles de Gaulle. I remember that day and the impact it had on the industry. It had ripple effects on the future of supersonic flight and airline innovation. Last Days of the Concorde was released only last year and since then I’ve had this on my list to read!

It was an excellent read and well put together. It profiled all the key people involved, each step of the journey; prior, during and and post the accident. The reader gets to understand about Concorde, supersonic technology, crash investigations all things air traffic control.

What I really liked about this book was all the facts, figures and stories about Concorde and its capability. It is such a shame it had to stop flying in 2003. After nearly two decades it isn’t a surprise it doesn’t fly given the small passenger capacity coupled with a high consumption of fuel. The world’s focus on climate change would never allow a plane like Concorde to continue flying today. With that said, my prediction is that supersonic flight will raise its head again in the future.