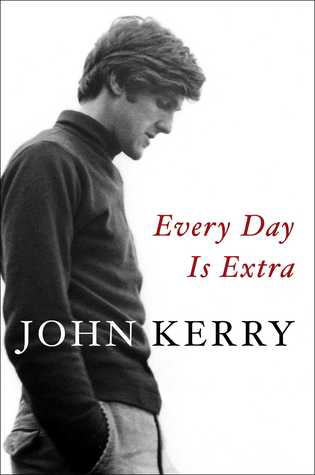 It is quite funny after finishing this book to realise that the title “Every Day is Extra” is a metaphor both for his approach to life but also that he is lucky to be alive. This is a story about a man who has had nine lives, a man of honour and a man who has given back to his country. Most of all, he has the most fascinating story to tell!

We all know John Kerry who was the Secretary of State, the Presidential Candidate and the Senator of Massachusetts. What I learned from the book was John Kerry’s character, his goals and his family. Last and most important is that he lives by the very mantra of making every day count.

There were many times Kerry would come out with quotes and interesting tidbits which I would need some time to digest and reflect on. One in particular was regarding Afghanistan and Pakistan in which he quoted a fellow colleague at the time: “Pakistan is a government without a country, and Afghanistan in the country without a government.” Very deep yet it makes sense when you think about it.

The book is certainly one to read. Kerry’s recall and story telling made the book thoroughly enjoyable. His journey has been both thrilling and amazing. Worth a read!