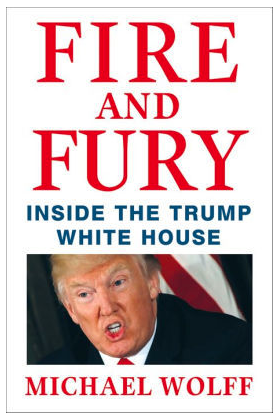 I was going to avoid this book (and Trump), yet it somehow ended up in my lap thanks to my wife. After reading Joshua Green’s “The Devils Bargin” (my review is here) I wasn’t sure how much more I would get out of reading Fire and Fury. That said they are two different books. Green’s was structured, insightful and backed up with research and sources. Wolff, to his credit, called out that his book was written based on 1st and 2nd hand experiences which he tried to present in the best way. Some of the stories corroborated/collaborated and some do not. His introduction clearly calls out that the reader should decide what is true given the conflict of the accounts written and the looseness with the truth and reality. Wolff writes a version of events he believes to be the truth.

The book does confirms my opinion of the Trump White House and what we see presented by fact based media. One that is in constant fire fighting, in-flighting and run by an meglmaniac. It takes the reader through the key events of the Trump Administration (e.g. Election Day through to the firings of Comey, Bannon, Scaramucci and Preibus etc.). Even though I am a avid reader of non-fiction and up to date with the daily media, I am still quite confused on how a government can actually run efficiently and effectively.

Worth a read? Sure, if you have the time and want a book that combines fact, heresy, gossip and entertainment. You certainly won’t come out at the end an energised nor positive person; more the opposite. Maybe the title best describes the outcome the reader: Fire and Fury!